I once asked a four year old kid, who is the prime minister of India?. he replied “i hate politics”. it made me smile.

Later, when i sat in a train it came back to me. Is politics a dirty game? is it so dirty, that even a kid hates it?

At least that is the consensus reached by the Indian society .People hate the government, they hate the system and the people in it. they just want to live their lives complaining about how convoluted and ineffective the system is, and how corrupt and diabolical the politicians are. people want no part in the dirty political game, not even the part where they vote.

What is the consequence of this general consensus by the public? at this crossroads, what does the future of the country look like? what happens when hatred becomes loathing and then something else, resulting in a mass hysteria where the country becomes unstable?

The consequence is a country ruled by thugs and criminals, a country where there is no place for mafia, because mob bosses are politicians, a country which in its next generation is divided into people who hate politics, and the others who believe it is OK to scam the public. at this rate our future looks dire, and we have already seen that it only takes one person to take the country by storm by tapping into the common emotions of the people, for good or for evil.

What people ignore are the good people in politics today. surprisingly, there are a lot of them. These are the people who earned respect for our country in the global arena. these are the people that are responsible for the growth rate and most of the good that is happening in this country in-spite of its issues.

It is not hard to imagine what their life is like, as people hate all politicians equally. no favoritism there. but, there is every chance that these people are going to get sick and tired of people blaming them for everything that goes wrong, and act like they are entitled to whatever that goes right. Imagine what happens when think they have wasted a part of their life for these ungrateful people. what happens then , is we lose them. we lose the only hope our country has to break the patterns that are holding us back.

Politics maybe dirty as a drain, but some people have jumped into it to clean it and if we don’t stop this abhorring attitude towards politics and politicians, it is going to get dirtier.Let us lose the attitude, and encourage the ones who want to do some good, and let us not teach our children politics is a  pigs’ playground.

at the end, if we haven’t done any good, at-least we wouldn’t have sabotaged the ones who do it.

Is politics a dirty game?

April 2007 8 million children out of school.

although the goal was to achieve complete retention by the end of 2010, i think we have done a reasonable job in primary education. Thanks to Kamaraj and MGR, the pioneers of mid-day meal scheme for the attendance rate achieved today.

having mentioned that, let us take a hard look at things. have we really accomplished anything worthwhile here? has education reached the standards it should have reached a long time ago? Is there enough emphasis on the quality of education in the schools today? are teachers well-trained and tested for their jobs? is the future generation of India getting the attention it deserves?

“Democracy cannot succeed unless those who express their choice are prepared to choose wisely. The real safeguard of democracy, therefore, is education.” 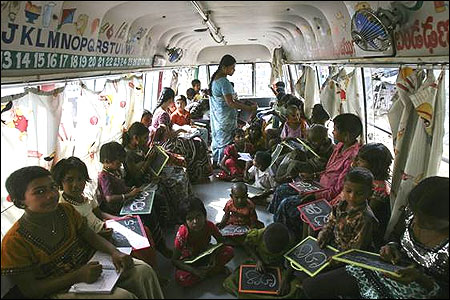 Did anything go wrong? why is teaching still substandard?

Because what we are investing is in schools and not in schooling. what we are emphasizing is on the infrastructure rather than the quality of education. we need a vessel to hold the substance alright, but what purpose would the vessel have served if we neglected substance to build the vessel?

What we have tried to achieve til now, is literacy. what we should achieve is education. when a person can read the name of the contestant, he is literate. if he can chose the right one, he is educated.

There is a ray of hope for the country’s future generation right now. it is important not to get carried away or complacent. it is time to take a leap in the direction of quality education.

A ray of hope.